Home
Android
What is Android Rooting and How to do it ?

Recently Arshee Shethwala asked me over my Facebook Fan Page about What is Android rooting and How to Root Android Devices. So, i decided to do a full post on it because its such a cool topic.

So the first question is WHAT IS ANDROID ROOTING and How to Perform Rooting of your Android Device?

The Android phone that you are using is running an operating system that was designed for commercial and private use. Like most any operating system, several features have been disabled, either for future use or to prevent the casual user from causing permanent damage to the operating system. 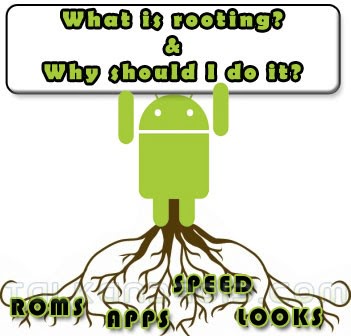 “Rooting” is the process in which the limitations are removed and full-access is allowed. Once rooted, the Android phone owner will have more control over many settings, features and performance of their phone. Basically, “rooting” means to get to the root of the operating system and to have the ability to make global changes.”

“Rooting” your Android phone does afford you numerous benefits, including;

There are two main disadvantages to rooting and Android phone;

Other potential disadvantages, though less severe, are still worthy of consideration;

So, the decision to “Root” your Android phone is one that should not be rushed into. Though the allure of having an unlocked phone is powerful, having a “bricked” phone is, trust me, not very much fun.