Android 4.0 introduced the On Screen Buttons and soon Google added a gesture to these virtual navigation keys. Since then, an upward swipe from the home button has become a shortcut to Google Now on Nexus devices which makes it possible to quickly launch an app (Google Now by default) by a swipe up gesture from the navigation bar, and sometimes this feature can be annoying when you accidentally trigger it while scrolling scrolling through a webpage or document.

Also these days, the stock Google launcher dedicates an entire home screen to Google Now, so this swipe gesture is no longer needed.

Fortunately, there is an app from developer Ulric Devaul to “disable” this feature, and the App is called “Gesture Disabler for Nexus”. Actually this app doesn’t disable the Google Now, but instead launches this app that does nothing. Follow these steps to get rid of the Google Now Swipe action feature.

Step 1: Search Gesture Disabler for Nexus by name from your Play Store app and install it, you can also use this link to head directly to the install page.

Step 2: Setting up Gesture Disabler as the Default App for This Gesture

Once Gesture Disabler is installed, set the app as the default handler of this gesture, by simply swiping upwards from your home button. When prompted, select “Gesture Disabler for Nexus,” then tap “Always.” 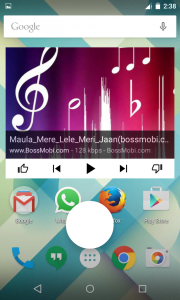 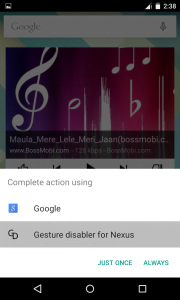 From now on, nothing will happen when you perform this gesture. If you’re scrolling through a webpage or document and accidentally trigger it, you won’t even be bumped out of the app you’re using.

This app does not provide any interface or a launch icon in the app drawer, this is because the app serves only as a handler of a system function—the Google Now swipe gesture. So it is not possible to uninstall it in the conventional way.

You Can use below methods to uninstall:

(1) Use an uninstaller app, there are many on Play Store, and AppWererabbit is a good choice. 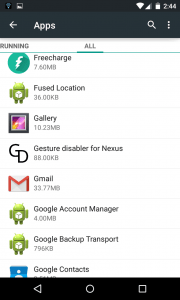 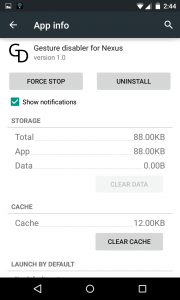