Hello Smartphone Users, in this post we will show you the list of top 10 games which are compatible with PPSSPP Emulator. PPSSPP is the only PSP emulator available for Android, Windows, iOS, Mac, and Linux.

UPDATE: We all know about PSP HIGH END and LOW-END games some were super hit and some were epic so today I am going to RIP those PSP games and upload them for you so you can enjoy your favorite PSP games on your beloved Android, Windows Phone or iPhone. PPSSPP With this emulator you can play almost all the PSP games on your Android phones easily. You can buy PPSSPP Gold from App Store to support the development of PSP Emulator. 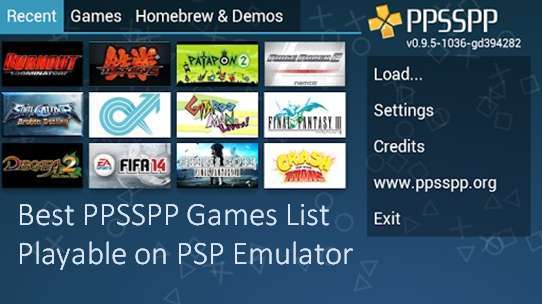 Tekken 6 the most famous PSP game is now available for Android mobile and tablets free at Apktank.com.Tekken 6 Sony PlayStation Portable [PSP] roms has now playable in Android, so play and enjoy on your Android device with full features of PSP game. – READ MORE

Ghost Rider PSP is a third-person game released for the PSP, PlayStation 2 and Game Boy Advance based on the movie of the same name. Xbox and GameCube versions of this game were canceled – READ MORE

Download Tom Clancy’s Splinter Cell PSP iso Gaming Rom for your Android Devices. PSP (Play Station Portable). Splinter Cell: Essentials starts off in 2009, after the events of Splinter Cell: Double Agent. Sam Fisher sneaks into the graveyard where his daughter, Sarah, who has been recently killed in a car accident, has been buried. – READ MORE

Prince of Persia is the top and most Addictive Game of PSP it has 100% smooth gameplay for Android. Finally
Prince of Persia Revelations PSP iso Gaming Rom is now playable on Android phones & Tablets. So download this game and play without any lacking on your android devices… – READ MORE

Let us know how it worked for you, and for more Android tips and tricks, Connect with us to stay updated with more on Facebook, Google+, and Twitter.

Just wanted to let you know thatWe’ve launched YouTube Channel where we upload awesome video content. Make sure you hit the subscribe button to stay up to date with the new videos we upload every week. Also, Subscribe us for more How-To Guides and Reviews…!!! @http://youtube.com/checknma for more How to Guides.