Home
News
“What If Apple Engineers Are Kidnapped And Forced To Hack The iPhone?” – Asks FBI Director

The drama in the Apple vs. FBI case reached its peak level when on Tuesday, FBI Director James Comey appeared before the House Judiciary Committee and defended FBI’s demands for unlocking the iPhone of the San Bernardino shooting case, asking a hypothetical question — “What if Apple engineers are kidnapped and forced to write code?” and calling the security concerns baseless. 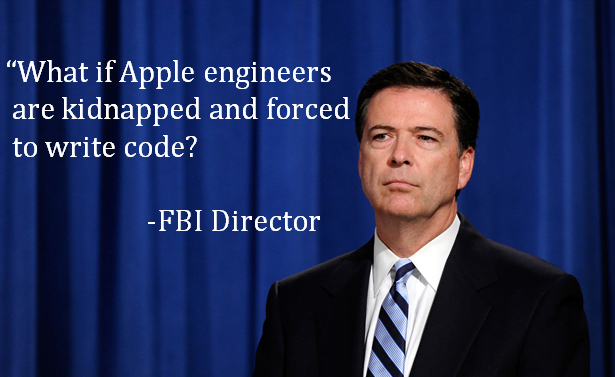 What if Apple engineers are kidnapped and forced to write code?

On Tuesday, it was the congressional hearing of San Bernardino iPhone unlocking dispute which is revolving around the questions if the federal law enforcement agency can force Apple to develop a backdoor — Apple named it a new operating system called GovtOS — to help the FBI unlock the infernal iPhone.

Before the House Judiciary Committee, things took a dramatic turn when Florida Congressman Ted Deutch asked Comey if the future consequences of a backdoor falling into the wrong hands were a valid issue. To this question, FBI director posed a hypothetical situation where Apple’s engineers would be kidnapped.

He said before the committee —

Slippery slope arguments are always attractive, but I suppose you could say, ‘Well, Apple’s engineers have this in their head, what if they’re kidnapped and forced to write software?’ That’s where the judge has to sort this out, between good lawyers on both sides making all reasonable arguments.

Comey labeled encryption as a long-term threat to the law enforcement process as it allows a criminal to go dark. Probably, by making the above statement, Comey tried to portray how Apple is capable of creating a backdoor for the FBI, but it’s refusing to do so.

While such situation seems impossible in real life, you would be surprised to know that Apple engineers are given guidance on what to do if they are kidnapped. They are told to “go along with the demands and do whatever’s necessary to survive.” In simple words, “Do whatever they ask. No heroes.”

It’ll be interesting to witness the outcome of this case that has been making headlines each day. While Apple is committed to make its future iPhones unhackable, FBI continues to demand the unlocking of the iPhone by calling it a necessary element of the investigation.